Chemicals are an essential part of our daily lives. Not only do they ensure our well-being, but also the high standard of living and comfort of modern society.
The European Green Deal adopted by the European Commission in 2019 includes, in addition to the comprehensive point of decarbonization, which is primarily discussed by the general public, measures against the production and use of chemicals that seriously damage both the environment and our health.

It is precisely this aspect that has so far hardly been noticed by the general public and has also been little addressed by many, especially medium-sized, companies in the chemical industry. However, the consequences of the European Green Deal, especially for the latter, are in some cases more far-reaching than the conversion to CO₂-neutral production, which is the primary objective.

For this reason, 5-HT sheds light on these issues, which have so far been overshadowed by the European Green Deal. What microplastics in cosmetics have to do with the concept will be just as surprising as the role of rain jackets. Nevertheless, both illustrate that the European Green Deal means much more than just a CO₂ reduction for the chemical industry. 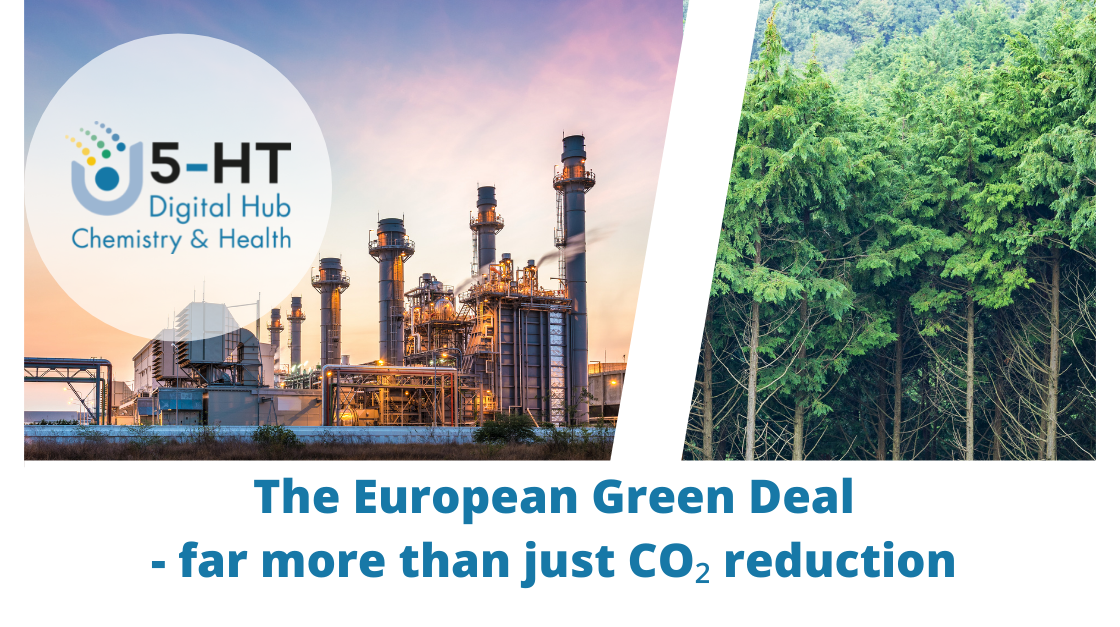 Climate change and environmental destruction currently pose an existential threat to our world. Past catastrophes such as heavy rainfall events or forest fires illustrate how serious the situation has become in Europe as well. The European Green Deal is now intended to counteract the climate crisis. More precisely, it was presented by EU Commission President Ursula von der Leyen in December 2019. At its core, the green package of measures for decarbonization and sustainable economic development aims to achieve a climate-neutral Europe by 2050.

In this context, von der Leyen emphasizes that solidarity is an integral part of the European Green Deal, according to which no one will be left behind. But strengthened climate targets mean regulations, restrictions and bans at the same time - from which the chemical industry is not exempt.

Why it's worth taking a closer look at the chemical industry

In 2018, Europe was the second-largest chemicals producer, generating 16.9 percent of total sales. Chemicals production thus represented the EU's fourth-largest industry, directly employing around 1.2 million people. The trend for the use of chemicals in consumer products is expected to continue to increase, leading to a projected doubling of global chemical use by 2030.

Although EU legislation is highly developed, it needs to be further strengthened because most chemicals have hazardous properties that can harm the environment as well as human health for generations to come. Thus, the European Green Deal is having a corresponding impact on the EU's chemicals policy.

The EU Chemicals Strategy for Sustainability

This strategy, adopted by the European Commission in October 2020, was the first step towards a pollution-free environment. This new strategy is a key commitment of the European Green Deal, as chemical pollution is one of the main causes of the Earth's vulnerability, influencing and amplifying planetary crises such as climate change, ecosystem degradation and biodiversity loss.

Consequently, chemicals, materials and products must be made inherently safe and sustainable from manufacture to the end of their life cycle by avoiding the most harmful properties and minimizing impacts on climate, resource use, ecosystems and biodiversity.

At the same time, people are to be protected from hazardous chemicals, which goes hand in hand with a ban on harmful chemicals in consumer products such as toys, baby articles, cosmetics, detergents and cleaning agents, food contact materials and textiles. Overall, the aim is to ensure that all chemicals used are safer and more sustainable in the future.

Safety and sustainability - what has to go?

The focus of the EU chemicals strategy is to ensure that the benefits of chemicals are exploited without harming the planet or people, both now and in the future. In addition to minimizing substances of concern, the combination effect of chemicals (cocktail effect) is considered. Similarly, an introduction of information requirements is intended to ensure that manufacturers and consumers have access to the chemicals contained in products.

But primarily, the chemicals strategy means phasing out the use of harmful substances such as endocrine disruptors, more precisely chemicals that affect the immune system and the respiratory tract. Even intentionally produced microplastics, such as those used for microbeads in cosmetics, will no longer be produced in the future, because:

"Microplastics have been found in marine, freshwater and terrestrial ecosystems, as well as in food and drinking water. Their ongoing release contributes to permanent contamination of our ecosystems and food chains."
- European Chemicals Agency (ECHA), 2020

Because the addition of microplastics to product groups such as fertilizers, cosmetics, and household and industrial cleaners results in approximately 42,000 metric tons of microplastics entering the environment each year, many EU member states have already introduced national bans on the deliberate use of microplastics. Although negotiations for an EU-wide ban are still ongoing until next year, 2022, forecasts already show that a positive outcome of the negotiations would prevent around 500,000 tons of microplastics from entering the environment over a time horizon of twenty years. Nevertheless, companies would incur estimated costs of up to €19.1 billion in the process.

In addition, persistent substances such as per- and polyfluoroalkyl substances (PFAS) will also be banned unless they can be proven to be indispensable for the common good.

Although various innovation and investment measures are intended to accompany the chemical industry in this change, the latter ban in particular will have unprecedented effects on the European chemical industry.

Per- and polyfluoroalkyl substances (PFAS) - everyone uses them, no one knows them

PFAS are a group of man-made chemical compounds typically used to create water, oil and stain repellent products. They are so effective that the are now manufactured in a variety of industries around the world. In addition to aerospace, major industries that use PFAS include defense, automotive, aerospace, textiles, leather and apparel, construction and household products, electronics, firefighting, food processing, and medical items.

"PFAS have been used for decades in numerous industrial processes and consumer products due to their special technical properties. They are difficult to degrade and are now detectable everywhere - in the environment, in the food chain and in humans."
- Federal Institute for Risk Assessment, 18.09.2020, Communication No. 042/2020

Without a doubt, safer and more sustainable chemicals are an ongoing necessity as well as a great economic opportunity. In this context, the European Commission has already banned the use of the PFAS group of substances in food packaging and fire-fighting foams by the end of 2022. Because further bans have also been announced, this example already gives an idea of what potentially lies ahead for the entire European chemical industry.

What to do when it rains? An example from everyday life

The ability of PFAS to repel both water and dirt is particularly valued in the textile industry, more specifically in the field of outdoor clothing. The substances are used, among other things, to coat rain jackets. An analysis of the use of PFAS in textiles has determined that fully perfluorinated polymers such as PTFE also belong to the PFAS group.

It is precisely these PFTEs that have the property of being breathable, which became the starting point for numerous product developments. The outdoor brand manufacturers producing in the EU are thus faced with hitherto unsolvable challenges with a ban on PFAS.

Although there are already fluorine-free alternatives on the market, such as hydrocarbons, silicones, dendrimers, polyurethane or nanomaterials, abandoning PFAS without an alternative of equivalent quality means only one thing for European outdoor product development in the long term: greenwashing.

While the EU emphasizes that the competitiveness of European industry will be supported by changes to chemicals legislation, thus providing a level playing field for European and non-European market players. But in the future, the most likely phenomenon will be that the production of CO₂-intensive products will be shifted to countries without strict EU Green Deal regulations.

"Greenwashing is the creation of a false impression or the provision of misleading information that a company's products are more environmentally friendly. Greenwashing is considered an unsubstantiated claim used to mislead consumers into believing that a company's products are environmentally friendly."
- Will Kenton, Investopedia, 01/23/2021

Thus, increasing imports as well as the elimination of domestic production could lead to a reduction of emissions in Europe only.

Chemicals are among the building blocks needed for a carbon-neutral economy. However, because chemical manufacturing is also an energy- and CO₂-intensive industry, efficiency means switching to chemicals and production technologies that require less energy. Consequently, the European Green Deal does not need less chemicals, but the right chemicals.

There is no doubt that the European Commission's adoption of the Chemicals Strategy in October 2020 has led to thinking in the area of green chemistry. This is how one of the startups from 5-HT's network felt addressed:

"When the European Commission announced last year that hydrogen would be a key factor in the European development strategy, we felt it was a call-to-action."
- Aleksandrs Parfinovičs, Chief Executive Officer at Naco Technologies

The European Chemicals Agency (ECHA) is also committed to contributing to the European Green Deal with its scientific and regulatory expertise, databases, digital tools, networks and practical experience with chemicals regulation. By extending its environmental certification to the EU's Eco-Management and Audit Scheme (EMAS), ECHA aims to become carbon neutral by 2030.

It remains to be seen whether the European Green Deal will boost the chemical industry with new innovations such as hydrogen technologies, or whether the combination of regulations, restrictions and bans will have a weighing effect after all.