Speech based biomarkers as innovation drivers in medical processes

What does speech say about us and how can automated speech analysis help in diagnostics and early detection of various diseases? The health startup ki:elements has developed an answer.

Founded in 2017 as a spin-off of the German Research Center for Artificial Intelligence by an interdisciplinary team of AI experts, clinicians, software developers, and psychologists, the Saarbrücken (Germany) -based startup has since pursued the goal of improving the care, diagnosis, and treatment of patients with neurological and psychiatric diseases by using artificial intelligence in medical processes.
For this purpose, ki:elements develops speech based biomarkers, making the company one of the pioneers in the field of speech-based diagnostics.

Nicklas Linz, Co-founder & CEO of ki:elements, has positive memories of participating in our 5-HT X-linker "Digital Health for Pharma": "The event helped us get in touch with a number of different pharmaceutical companies and talk to a wide variety of people. We are confident that collaborations will follow this."

In an interview with 5-HT, Nicklas explains the role speech based biomarkers play in medical innovation, as well as how ki:elements differs from healthcare startups with similar solutions. 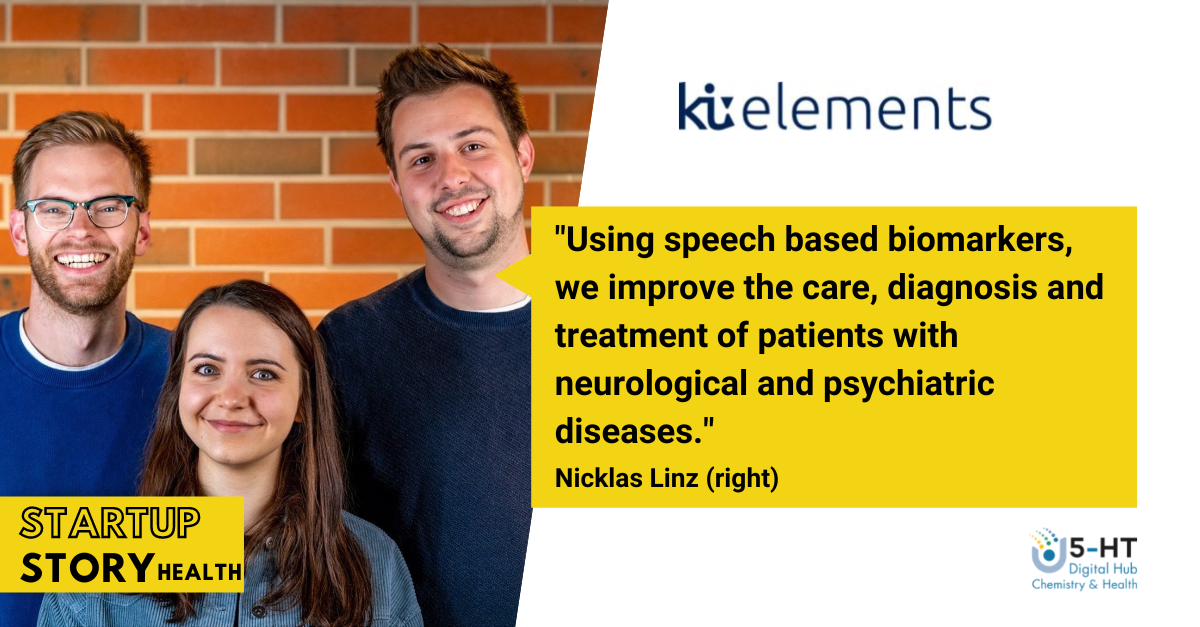 Lack of digitalized medical care as motivation to found the company

The ki:elements team recognized that many psychiatric and neurological disorders are largely underdiagnosed today. One of the reasons for this is that diagnoses are still made with pen and paper, as was the case thirty years ago, and generally few digital tools are used: "The fact that in psychiatry in particular, a diagnosis is determined exclusively in conversation has its advantages, but is certainly very subjective. We saw an opportunity here for language to play a role as a window into brain health in many disorders, and for diagnosis and monitoring of these disorders to be more objectively presented."

Speech based biomarkers and how ki:elements uses them

Basically, biomarkers refer to specific biological or medical characteristics that can be measured and objectively assessed. Especially for personalized medicine and the development of new drugs, biomarkers play a major role. In clinical trials, biomarkers can be used to demonstrate the effect of new drugs or treatment methods or to assign patients to treatment groups.

In this context, ki:elements is developing speech based biomarkers based on speech algorithms. More specifically, Nicklas explains, "What distinguishes a digital biomarker from a conventional biomarker is that it is captured by a digital sensor product. When this sensor product picks up speech, we're talking about a speech biomarker.

Ultimately, this algorithm analyzes speech recordings and measures certain symptoms or changes in the body from this."

Nicklas illustrates the function of speech based biomarkers with two application examples: "Suppose a patient is taking a drug that improves his cognition, our speech biomarkers can objectively measure a success. On the other hand, they can also measure deteriorations in cognition caused by a disease, for example," he adds.

Science as a distinguishing feature of ki:elements

Characteristic of ki:elements is that it solves problems using scientific methods: "Since our founding, our business model has essentially consisted of selling science. This takes the form of either products based on science, algorithms validated with scientific methods, or innovations in terms of scientific projects."

It is precisely this science-based work of ki:elements that also appeals to their target audience: "Our biggest partners are pharmaceutical and life science companies. Usually, they use our technology together with their drug development to either test the effectiveness of an active ingredient, to measure signals from a patient, or to enable applications related to a clinical trial."

Digital technologies are particularly useful for preparing clinical trials, as they can be used to find out in advance what symptoms an individual person has and whether that same person is suitable for the specific trial.

"As a privately funded company, we have grown without investors so far and want to continue to follow this strategy. In doing so, we are always open to new partnerships, such as the one with 5-HT.

Through this cooperation, we hope to solve one problem in particular, namely the difficulty of doing business with the right people in this large, globally networked world. Because making contacts is incredibly time-consuming for a young startup, which is why we hope to get into the right rooms directly and efficiently via the network of 5-HT in order to exchange ideas with the right people, just like with the 5-HT X-linker," concludes Nicklas confidently.