Chemical biology for drug development in the age of genome research

Chemical biology holds a crucial role in today's drug development, bridging the gap between modern genomics research and both societal and economic demand to develop new drugs from this knowledge.

Our ecosystem startup biotx.ai precisely addresses this issue, as since its founding in 2017, the Potsdam-based health startup has focused on the efficient development of new drugs.

In response to previous research gaps in the chemical literature, Marco Schmidt, Chief Scientific Officer at biotx.ai, recently published his book 'Chemical Biology and Drug Development'. This book addresses the new challenges in drug development that chemical biology is trying to answer. The main focus is on new approaches to drug development from gene to drug.

5-HT also sees enormous innovation potential in this area. In an exclusive interview with Marco Schmidt, he takes a closer look at the topic and summarizes not only his reasons for writing the book but also the most important findings of his publication. 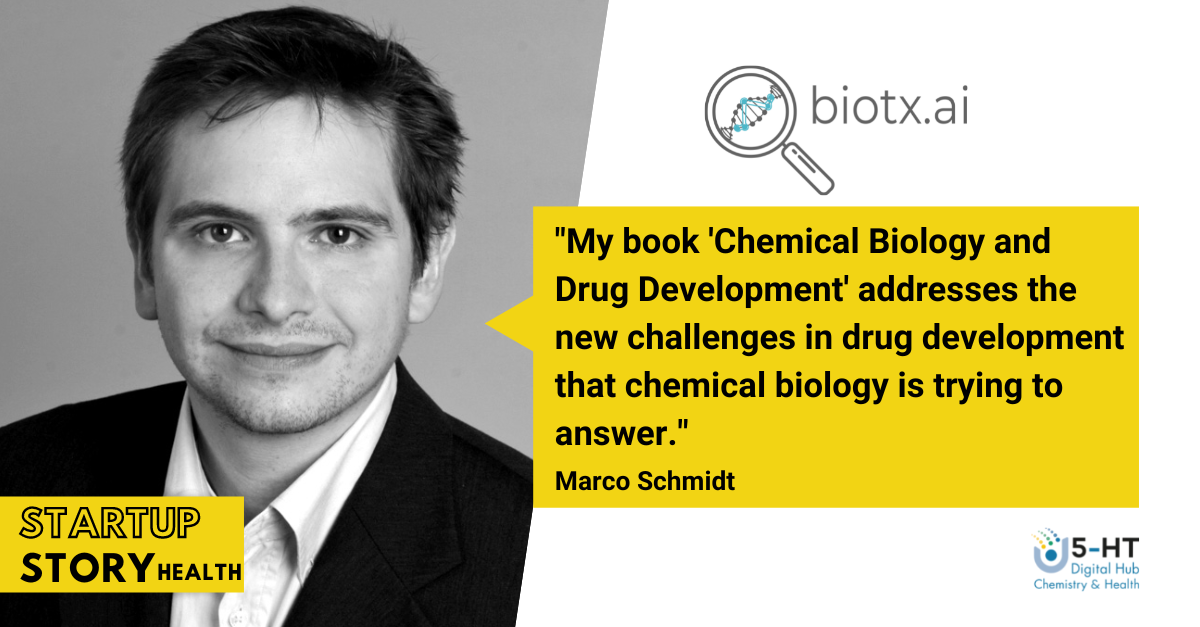 The incentive to write 'Chemical Biology and Drug Development'

'The development of new drugs is becoming increasingly difficult. The reason for this is, on the one hand, that we cannot predict the clinical effects of drugs. On the other hand, that development to date has been reductionistic.

You reduce a complex system like that of humans into many small individual parts, and if the active ingredient works in the many small experiments, it should also work in humans. Unfortunately, that's not the case, ' Marco says.

In his opinion, a more holistic view should be taken here: 'In chemical biology, one tries to understand entire biological systems by reversibly manipulating these systems with active agents. To shed light on this, in the hope of changing something in the industry, was my motivation to write the book.'

'Although genome research has become an essential part of drug development, the expectations of the Human Genome Project, such as finding a cure for every disease, have unfortunately not been fulfilled to date.'

Marco explains the reasons for this as follows: 'This is because genomic data are extremely difficult to analyze because of their high-dimensional structure (small number of patients, but at least 200 million differences in the genome). For example, one would have to sequence the Earth's population 500 million times to have a sufficiently statistical population to analyze two-way interactions in the genome.'

From this described problem, he concludes: 'We need algorithmic solutions to be able to find a cure for any disease.'

How DNA, RNA and proteins are relevant to drug development

Defining exactly what this is all too easy for Marco: 'The challenge is undoubtedly to establish new molecular entities beyond small molecule compounds and antibodies as drugs. In the Corona crisis, this has already worked very well with the new mRNA vaccines.'

In this regard, new technologies such as CRISPR/Cas or the protein degraders can modulate key disease mechanisms for the first time, better than small molecule compounds or antibodies can.

'Still, I insist that we need to predict the effects of even these new agents in clinical trials. Clinical trials are the limiting factor, and only when we have solved this problem can a cure be found for any disease.'

'If, on the one hand, chemical biology enables us to realistically assess the effect of new drugs even before clinical trials, and on the other hand, drugs with new mechanisms of action such as CRISPR/Cas are available to us, it should be possible to develop new drugs faster and more cheaply than before.

Particularly patients suffering from rarer diseases will benefit enormously because development will be profitable even for small patient groups. '

Finally, looking to the future, Marco concludes: 'I can even imagine this changing the entire industry: Away from a small number of large corporations to a large number of medium-sized companies, as the entry barriers of high capital costs come down. '

If the contents of the book have sparked your interest for more, you can purchase the full edition of "Chemical Biology and Drug Discovery" at a cost here.

Want the latest tech and industry news, events, relevant info from the network and more?

Exchange ideas with innovative startups and future-oriented companies in our network. We look forward to meeting you!