Tomorrow's chemical and healthcare industries need clean energy - which is exactly what EH Group Engineering AG, founded in 2017, offers. With its fuel cell technology, the Swiss startup aims to accelerate the commercialization and large-scale deployment of hydrogen fuel cells in a low-carbon world.

By participating in the X-Linker New Energies - H2, the startup had the opportunity to advance their innovation. On this, Christopher Brandon, co-founder and director, recalls, "Overall, it was a high-caliber event that we enjoyed participating in. Especially in the preliminary discussion with Frank Funke, his good sense of what companies want and how we can contribute as a startup came through."

In the interview with 5-HT, Christopher gives us more exciting insights into the field of rapidly growing hydrogen technology. 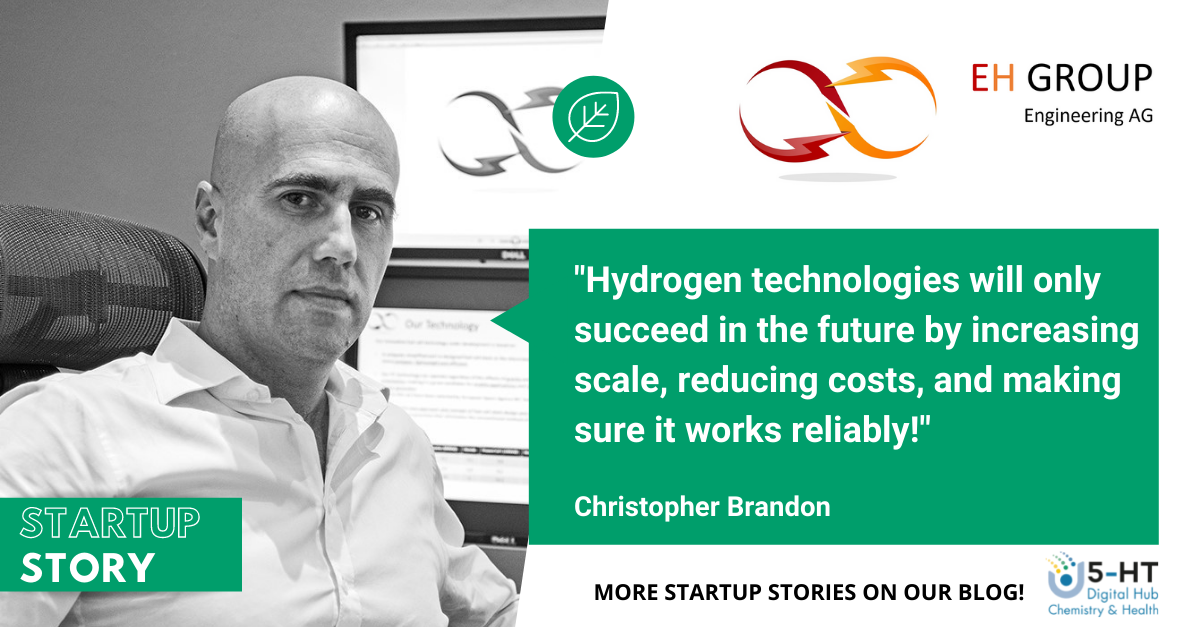 With the foundation against conventional technologies

Christopher shared this ambition with his partner Dr. Mardit Matian when they founded EH Group four years ago: "My business partner has been involved in hydrogen and field cells for 20 years. Four years ago, he had a vision that future technologies should continue to develop in this direction. To actively participate in this, we founded EH Group."

Meanwhile, the EH Group team consists of 15 employees, but "by the end of 2021, we will probably grow by 30 percent again," says Christopher. Not only internally is their success confirmed by a growing team. The young startup is also receiving encouragement externally, as their innovative fuel cell technology was awarded the EFFICIENT SOLUTION label by the Solar Impulse Foundation in 2020.

First of all, what exactly are hydrogen fuel cells?

Fuel Cell is an electrochemical device that converts energy of hydrogen into electricity, water and heat. A fuel cell consists of several cells that together form a stack. To convert the energy stored in the hydrogen, it is split up accordingly in the fuel cell. Thus, a fuel cell can convert hydrogen into electricity and heat through an electrochemical reaction.

How exactly does EH Group's concept build on this?

"With our concept, we primarily fulfill three goals," Christopher begins: "First, our innovative fuel cell technology has a high-power density. This is because the fuel cell stacks, we have developed are based on a completely redesigned microstructure level. This makes them more compact, lighter and more efficient. Secondly, our system architecture has been simplified and we achieve fewer disruptive loads, lower costs and higher efficiency.
Finally, we have a transformative assembly and production innovation which significantly reduces costs and is aimed at rapidly scaling up.

A wide range of fuel cell applications means a diverse customer base
The extreme compactness of EH Group's fuel cells makes them ideal for mobile applications in buses, trucks and forklifts, for example. But they can also be implemented in boats and drones, or as Christopher puts it more broadly, "Where weight and volume reduction are two key criteria, it makes sense to use our technology."

Christopher emphasizes that these are just a few of the markets that would benefit from large-scale adoption of EH Group's innovative technology. That's because the fuel cells can also be used in stationary applications such as microgrids, commercial buildings, data centers, telecommunications towers and hospitals.

How exactly does EH Group monetize this concept?

"On the one hand, we operate as a fuel cell supplier, through which we generate direct revenue. In this context, we also offer our product customized for key accounts. For example, if they need a stack in a certain fit because it's going to be implemented in a certain product, we can do that," Christopher said.

Ultimately, EH Group is able to remotely monitor the performance as well as the health of all systems. This can provide predictive maintenance as well as notification of when a stack needs to be upgraded or if components need maintenance.

Contributing to a low-carbon world - What are you most proud of?
"Probably the fact that we were involved with fuel cell technology long before decarbonization and hydrogen became a big issue. We saw the urgency of finding a low-carbon solution for business and industry early on. While we didn't quite expect this topic to develop such rapid momentum, it ultimately reinforces us in our mission."

But besides that, Christopher also emphasizes the importance of the stable and reliable EH Group team, which, according to him, is the backbone of any company. He would describe their corporate culture as fellows: "We have flat hierarchies, where everyone works independently and responsibly. Because our work requires knowledge in many different areas, it's enormously challenging at the same time. But that makes it even more gratifying to celebrate joint successes."

Not a European story, but a global one: plans for the future

Currently, Christopher describes EH Group's status as "between start-up and scale-up. Because we are still in the early stages, we are currently focusing our business on Europe. That's because we find that it makes more sense to stay in the neighborhood at the beginning."

For the future of hydrogen systems, he hopes, "Fuel cells, as well as the other elements that must be required for hydrogen ecosystems, will become less expensive. Specifically, that means cheaper hydrogen, cheaper storage, and cheaper production and deployment solutions."

"Hydrogen technologies will only succeed in the future by increasing scale, reducing costs, and making sure it works reliably."

At the same time, Christopher emphasizes that Europe has been a major driver of new hydrogen technologies over the past 14 months, particularly through the European Green Deal with its demands for green technologies.

How can 5-HT support you in this context?

"Our goal is to establish partnerships with companies that share our vision. The fact that 5-HT is enormously helpful in this regard already became clear at the X-Linker New Energies - H2. This very successful, well-organized event encouraged us in our future cooperation with 5-HT. Your focus on the chemical industry is also relevant for us, because there are numerous areas where a chemical company could contribute its expertise to the further development of fuel cells. For example, in materials such as sealants, membranes, catalysts, lightweight composites. We are already producing and developing many things in this area."

Christopher concludes, "It's a long road, but with the right partners by our side, many things become easier. We value 5-HT as one such partner and look forward to their support accordingly."